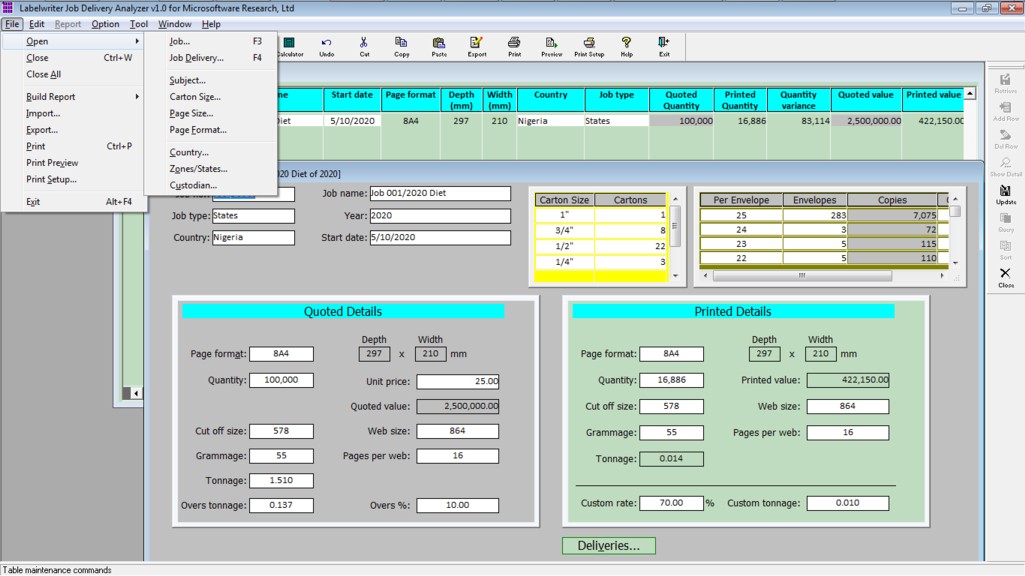 10051. Job Delivery Analyzer: Completed work on the “Add new job” form, resolving paper tonnage calculation issues caused by integer arithmetic inadequacies. Began work on the main job display form. Encountered a major issue in which PowerBuilder 8 refused to save changes to the form due to unexplained “internal error,” which took over four hours to resolve.

10062. Job Delivery Analyzer: PowerBuilder went back to reporting “internal error” for the job form when we wanted to save changes and after recreating another version from scratch and comparing the source codes we realized it was creating another datawindow control as a duplicate of one created in an ancestor window that was responsible, as the copy got defined as "from dw_1 within w_job_form" instead of "from datawindow within w_job_form". With the internal error issue on the job form put to rest, we built up the main job form, copying code from the earlier “Add new job” form to handle calculations.

10073. Job Delivery Analyzer: Completed the data entry implementation for the main job form including job deliveries that had its separate window, moving on to considering implementation of Labelwriter delivery report importing, borrowing code previously created for MoneyBooks for a window to accept user’s list of files to be imported.

10095. Job Delivery Analyzer: Tested and revised the successful packing summary import, before moving on to implementing delivery note import that quickly met with a stumbling block. The issue was due to the fact that unlike the packing summary report, the delivery note was implemented in Labelwriter as a composite report containing other nested reports, and we needed access to the nested report columns.

10106. Job Delivery Analyzer: Investigated the delivery note import issue and arrived at the right “dot notation” to use to access the nested report content. Though not seen documented, the PowerBuilder describe() function didn’t work for some types of nested reports, just like getchild(): Rather than using psr.describe('delivery.object.datawindow.objects') for instance that produced '!' as result, the right notation was the full psr.object.delivery.object.datawindow.objects which produced the correct value.

10110. Job Delivery Analyzer: Successfully implemented the importing of delivery notes, including the plain version, also adjusting the handling of new subject codes so that the user was given the option of specifying an existing subject to replace them with rather than always adding them to the subjects list, as this was one feature the client had mentioned.

10121. Job Delivery Analyzer: Implemented the importing of delivery notes for a different job type, Mini-zonal (West Coast), without much stress as it was similar to the zonal type that was first done.

10132. Job Delivery Analyzer: We enhanced the job grid with three computed columns (last delivery date, envelope and carton analysis details), went on to implement a Job Delivery menu option for querying information from the job, delivery and other referenced tables, allowing limited updating of the delivery data, among other things. We made sure the Report Manager option was working, displaying a customized version of the one of 2019 Labelwriter, but without packing summary merging features. Finally we built the executable application. What was now left was to implement reporting and graphing then possibly create online help documentation.

10191. Job Delivery Analyzer: Completed formatted report versions of the job delivery and job grids, after adding custom rate and tonnage to the job list. Rebuilt the executable file then began first round of general review and testing.

10202. Job Delivery Analyzer: Implemented the About window and addressed noted test issues. Continued general testing against an upgraded database, with next thing to be done being the online help documentation. 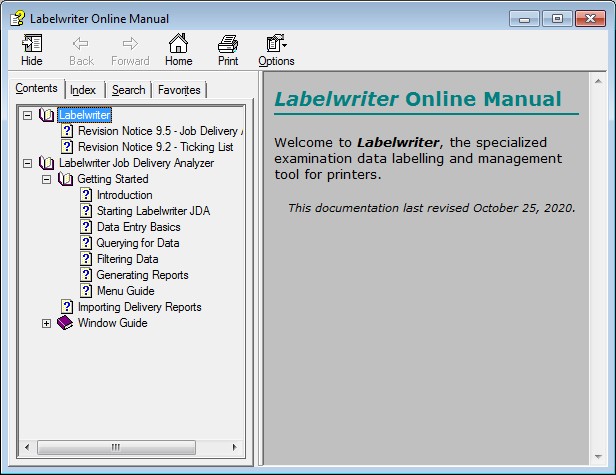 10224. Took time out to implement a database change for MoneyBooks Time Manager, triggers that set the work free day status for project activity records when the holiday table is changed. On Job Delivery Analyzer we began work on the online help (compiled HTML) documentation, copying over and editing relevant help files from Gerian, replacing the image files, before we start adding the new ones specifically for Labelwriter and Job Delivery Analyzer.

10235. Job Delivery Analyzer: Built the online help documentation to a presentable state, so could now work on the installers.

10246. Created two setup installers, one for Labelwriter and the new Job Delivery Analyzer module, the other for the archive of 13 prior versions. Concluded testing of the installers on a desktop, then went on to revise the online help documentation, now remaining to upload the installers to the server.

10261. Labelwriter 9.5 upgrade: Emailed the client the download links for the installers, bringing to an end initial work on the upgrade.

Work on the next major version 9.5 upgrade of Labelwriter that began last month continued with the second phase, development of the new Job Delivery Analyzer module. The upgrade was completed and delivered for installation by the client. A minor database revision was also made to MoneyBooks Time Manager.
If you like this post please register or log in to be able to subscribe and be notified of new posts by admin.